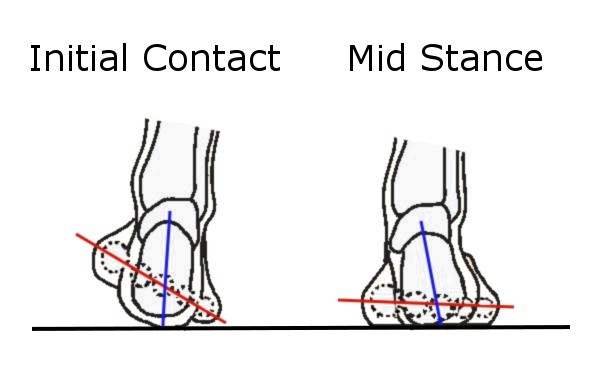 Below is how forefoot varus would look on the right foot when viewed from behind. I like to think of the stable position of the foot as a tripod, with the three points of contact being the:

With an uncompensated forefoot varus positioning there will only be two points of contact:

In order to get the inside part of the forefoot to the ground, a common compensation is pronation of the foot or rolling inward.

In other words, the heel will evert (angle outward) so that the inside of the foot can make contact with the ground in the compensated position.

Forefoot supinatus is a soft tissue adaptation that likely results from insufficient pronation control. It is not necessarily the cause of excessive pronation. Still, I discovered that to fix a collapsing arch these soft tissue changes need to be corrected.

It’s reported that supinatus is much more common than a rigid forefoot varus. A rigid deformity would mean that either the position or shape of the bones is blocking movement making it unlikely to respond to corrective exercises. In my case, I was dealing with a forefoot supinatus. But only on my right side.

The goal of the exercises I performed for correcting the supinatus was to strengthen the muscles that invert the heel while pronating the forefoot. This involved, in part, using muscles that pull the base of the big toe down while preventing the heel from everting.